The Fed’s increasingly hawkish posture and actions resulted in continued losses for the stock and bond markets over the third quarter. Specifically, the S&P 500 fell 4.9% in Q3 and the benchmark Bloomberg Barclays U.S. Aggregate Bond Index (Agg) fell 4.4% for the quarter. On a year-to-date basis through the end of Q3, the figures are worse, with the S&P 500 down 23.9% and Agg dropping 14.5%. The traditional diversified portfolio of 60% Stocks / 40% Bonds is having its worst year since The Great Depression (1936).  The main culprit, of course, was continued high levels of inflation, in parallel to the aforementioned Fed policy. Although inflation may have peaked in August with the Consumer Price Index (CPI) reading of 9.1%, its most recent value of 8.3% is uncomfortably high and has forced the Fed’s hand into its current tightening mode. The well-known financial expression, “Don’t fight the Fed,” is ringing true in spades this year, as evidenced by the steep stock and bond market losses.

In February, the Federal Funds Rate stood at 0%, a far cry from its current level of 3.25%. A series of 0.75% “jumbo” rate hikes in the interim has concerned market participants about an impending recession since monetary policy is often implemented with a 3-6 month lag. Long-term interest rates have increased in tandem with short-term rates, as evidenced by the benchmark 10-Year Treasury Note coming within a whisker of the 4.0% mark, its highest level since the spring of 2008. Mortgage rates touched 7.0% at the national level, also the highest levels since 2008, and are sure to cool off the previously red hot housing market.

The sharp rise in U.S. interest rates versus many others set by central banks around the world, has helped result in a surging U.S. Dollar. An exceptionally strong dollar hurts the profitability of multinational companies as their customers are less able to afford U.S. produced goods and services. Specifically, bellwethers FedEx, Nike, and Microsoft have alluded to the deleterious effects of a strong dollar on their profits. In addition, many emerging market borrowers issue debt tied to U.S. interest rates, negatively impacting their cost of capital and ability to fund ongoing or new projects.  The continuing war between Russia-Ukraine and frosty relations between the U.S. and China over Taiwan and China’s purchase of Russian oil added to the geopolitical risks over the quarter.

We expect continued volatility throughout earnings season, but looking ahead the odds are skewed towards positive returns for long-term investors. The key factors shaping our outlook are Fed policy and the path of economic growth. We expect the Fed to raise short-term rates to a level of 4.25% to 4.50% by the end of the calendar year and then pause as it assesses its policy impact on inflation. The combination of higher interest rates, sticky inflation, an excessively strong U.S. Dollar, and decelerating economic growth result in a high probability of the economy entering a recession within months. Since World War II, the average recession in America has lasted between 8 to 10 months. Financial markets are forward looking and often increase before the end of the recession and/or when the Fed has finished its rate hike cycle. In combination with strong historical performance following midyear elections we are optimistic on equity returns for 2023. We also believe bonds will return as ballast for diversified portfolios in the coming year since interest rates appear close to stabilizing.

The table below provides further reason for optimism for long-term investors. It examines the performance of the S&P 500 subsequent to 20%+ drops, the threshold commonly used to determine a bear market. In 70% of the periods since 1950, returns were positive one year ahead, with an average return of 15%. 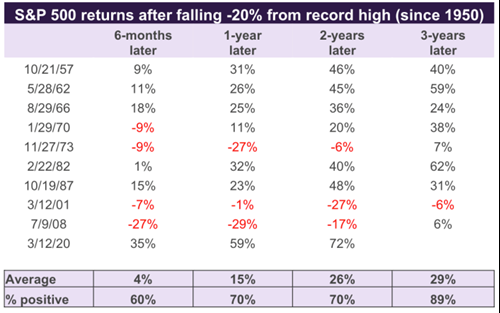 There are always risks to the financial markets, but the current period is unusually volatile as represented by the heightened levels of the CBOE Volatility Index (VIX). Of course, we must start with the ongoing war between Russia and Ukraine. Although we hope for a speedy and peaceful resolution, the “annexation” of portions of eastern Ukraine by Russia after sham elections has increased the tensions. As Ukraine has regained some of the annexed regions, there remains a low, but nontrivial, possibility, that a cornered Russia will use a tactical nuclear weapon, dramatically escalating the conflict.

We mentioned the Fed policies of increasing interest rates and shrinking the money supply as significantly increase the odds of a recession, delaying any sustainable stock market rally until there is light at the end of the (economic) tunnel.  Earnings season will kickoff in earnest within a week or two and the risk of earnings estimate cuts may place further downward pressure on stock prices in the near-term. China is still grappling with the fallout from COVID-19 and its crumbling real estate market, exemplified by the ongoing problems faced by Evergrande Group.  Given China’s status as the second largest economy in the world, and its importance to leading multinationals such as Apple, Starbucks, and Tesla, it must recover in order for the global economy to be hitting on all cylinders. Outside of Russia, Ukraine, and China, geopolitical risks remain with North Korea resuming its unprovoked missile launches over Japan, OPEC+ significantly cutting oil production, and ongoing protests in Iran and other countries.