U.S. equity markets posted the second losing week to start 2022 last week, although the losses were quite mild.  The S&P 500 was down 0.30%, while the Dow Jones Industrial Average declined 0.88%, and the Nasdaq Composite shed 0.28% for the week.

We watched closely the inflation numbers that were released last week for signs of how much impact inflation could have on consumer wallets and their buying power, as consumers make up 70% of the U.S. economy and inflation remains the biggest threat to consumer confidence over the near term.

Producer prices rose 9.7% during 2021, which was the highest calendar year increase going back to the inception of the data in 2010.  Although the year over year number is at a record, there are early signs of a possible peak in producer price increases as the month over month changes have been moderating.  The market believes that the inflation rate will peak in coming months and may start to moderate unless we have a second shock to the supply chains with soaring Covid cases.

As a result of high inflation and surging Omicron cases, consumer sentiment fell to a multi-year low as reported by University of Michigan last week.  The retail sales report for December was also weak and showed a 1.9% decline, however we believe that much of the holiday spending had been pulled forward to October as shoppers worried about supply shortages.  As shown in the below chart, consumer balance sheets are in good shape historically with record jump in housing prices, significant appreciation in financial assets, and trillions of dollars in government aid. 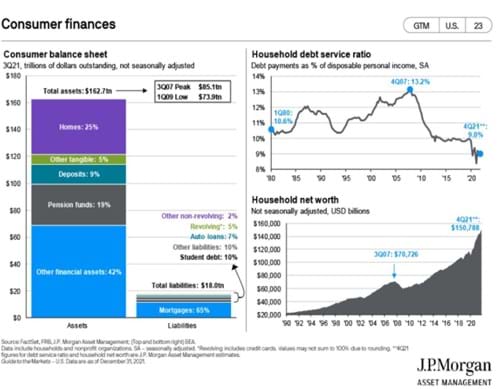 Initial jobless claims ticked up to 230,000 last week due to Omicron, well above the 200,000 estimate as well as the prior week’s 207,000 reading.  Nonetheless, the unemployment rate, 3.9% in December, is almost back at the pre-pandemic levels.

The Federal Reserve, which has a Board meeting next week, signaled that they will soon raise rates following the end of their bond purchasing program.  They will also likely begin a balance sheet reduction, which has ballooned to $9 trillion during the pandemic.  We see an overly hawkish Fed and monetary policy mistakes as the second biggest threat to the market after inflation.

Speaking of the Fed, the U.S. Senate had re-nomination hearings for Chairman Jerome Powell and nomination hearings for Vice Chair Lael Brainard last week.  Powell stated in front of the Senate committee that the U.S. economy is healthy enough and in need of tighter monetary policy.  He also said that the Fed will use its monetary policy tools to get inflation back, which includes more aggressive rate hikes if inflation remains at high levels longer than expected.

The fourth quarter earnings season kicked off with Delta Airlines on Thursday, which posted the highest revenue since late 2019 during the last three months of 2021 with strong holiday bookings, although still down 17% from the pre-pandemic levels.  For the full year, Delta reported a net profit, its first in two years, thanks to federal aid.  Airlines are struggling with tens of thousands of flight cancellations as employees are calling out sick due to Covid.

Three of the largest U.S. banks reported on Friday.  JP Morgan and Wells Fargo reported good revenue and earnings numbers with better than expected credit losses and loan growth.  Citigroup had an earnings miss due to an increase in operating expenses.  Shares of all three banks declined in value on Friday, as the banking sector had already appreciated double digits in the first half of January heading into the reporting season, and investors were not wowed by the mixed results, especially with prospects of moderating revenue and increase in wage inflation.

The aggregate earnings growth for the S&P 500 companies is expected to be 22% in the fourth quarter and 49% for the 2021 calendar year.  As we discussed in past commentaries, we do not expect these high numbers to last as economic growth and earnings growth moderates in 2022 as a result of tighter monetary policy, slower fiscal spending, and potential for contractions in profit margins and consumer spending due to high inflation.  As a result, we expect earnings growth in 2022 to be in single digits, in line with historic averages.

Earnings season will pick up momentum this week with Goldman Sachs, Bank of America, Morgan Stanley, Procter & Gamble, Netflix, and American Airlines reporting, among others.  The Economic Calendar will be light this week, with housing starts on Wednesday and existing home sales on Thursday, along with the weekly jobless claims.  Federal Reserve officials are in a quiet period this week ahead of their meeting next week, so Treasury markets will be a little quieter than usual.