U.S. stock markets traded higher last week with hopeful signs coming out of the Russia-Ukraine negotiations in Istanbul last Tuesday, however the rally fizzled out towards the end of the week and the U.S. equity markets finished the week near the levels where they started.  Only time will tell if Russia is going to follow through on its promise to scale back operations in Ukraine, but investors could get enthusiastic if one of the headwinds markets have been facing this year may see some type of resolution, although it could be a fragile one.  S&P 500 closed the month of March up 4%, however closed the volatile first quarter of the year down -5%.

U.S. bonds wrapped up the worst quarter in more than 40 years during the last 3 months.  Long-term bond holders have suffered major losses year-to-date.  By way of example, the 20+ year Treasury Bond Index is down 11% in 2022 as the yield on the long-term bonds have increased from 1.91% to 2.54% in the first quarter.  Beacon’s fixed income strategies fared much better, thanks to their focus on bonds with limited interest rate sensitivity.  Commodities posted the best performance in 32 years due to supply challenges, up 29% year-to-date.

What kept investors on the edge last week was the so called “yield curve inversion” whereby short term bonds’ yields exceed those of long term bonds, in what is typically a sign of an upcoming recession, albeit it could still be years away.  While the 2yr – 10yr Treasury yield curve briefly inverted by a few basis points for the first time since 2019, the length and the magnitude of the inversion is also important, hence we do not assign a high probability of a recession in the near term based on an intraday and tiny inversion of the yield curve.  In fact, the 1yr price return on the S&P 500 index was positive in 6 out of the last 8 inversions, with an average return of +11.5%, as shown in the below chart.  While the war in Ukraine poses important risks to growth in U.S. and around the world, our economic outlook for 2022 does not include a recession. 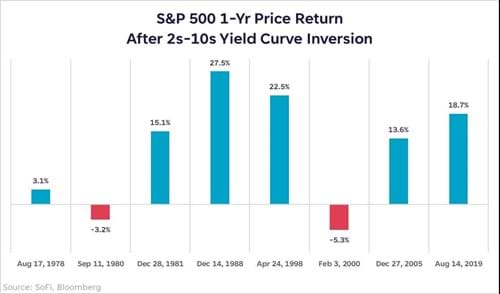 ADP reported last week that private payrolls increased by 455,000, slightly ahead of the 450,000 estimate.  The more closely watched nonfarm payrolls report also showed robust jobs growth of 431,000 on Friday and the unemployment rate dropped from 3.8% to 3.6%, around the pre-pandemic level low.  The labor markets remain tight with 11.3 million job openings against a pool of 6.3 million unemployed people, leaving a record gap of 5 million jobs that cannot be filled with available workers.  Average hourly earnings are up 5.6% year-over-year, slightly more than expected.  The Federal Reserve officials are watching the jobs numbers and labor markets closely as they continue to combat rising prices across the U.S. economy.

The Fed is also keeping an eye on the personal consumption expenditures (PCE) index, which increased to 5.4% from a year ago excluding food and energy prices, the highest increase since 1983.  The index was a touch lower than the 5.5% estimate and its monthly increase of 0.4% was in line with the estimates.  Fed’s next meeting is scheduled for May 3-4.

The Biden administration released its 2023 federal budget proposal last week.  In light of increasing geopolitical uncertainty, the proposal includes $31 billion in new defense spending for the Defense Department, which will bring the total national defense spending to $813 billion.  It also includes higher spending for the Justice Department to fight crime at home, and higher state and local law enforcement grants for hiring new police officers.

To pay for the additional spending, Biden’s proposal includes provisions to raise the corporate tax rate to 28%, which is the midpoint between the current rate of 21% and the previous rate of 35% in 2017.  Another revenue raiser is restoring the top tax bracket for people making $450,000 or higher from the current rate of 37% back to 39.6%, which is the rate it is scheduled to revert back to in four years.  Perhaps the most eye catching and controversial proposal is imposing a 20% minimum tax rate on the top 0.01% of earners and households worth more than $100 million; the so-called “Billionaire Minimum Tax”.  Historically, budget proposals have been just that, and making any changes to the tax code will prove especially difficult this year, given the narrow window before the midterm elections in November.

The administration also decided to release an unprecedented 1 million barrels of oil per day from country’s strategic petroleum reserve for several months, up to 180 million barrels in total, in an effort to cool soaring crude oil prices which have surged to record highs after Russia’s invasion of Ukraine and subsequent supply concerns.  Several states have suspended gas taxes to ease the financial burden from rising gas prices on consumers as well.  The benchmark West Texas Intermediate futures dropped by 6% from $113.90 to $99.27 per barrel last week.

Home prices rose 19.2% from last January to this January, up from the 18.9% increase last year.  Phoenix, Tampa, and Miami topped the annual gains with 28% - 33% rates of home appreciation.  Strong demand and tight supply kept the housing market strong, although higher mortgage rates began to affect sales since January.  We will likely see weaker housing numbers in the February and March reports.  Some of the early indicators such as pending home sales and mortgage demand are already pointing in that direction.  Pending home sales are down four months in a row, and new mortgage applications are down 10% from a year ago.

On the healthcare front, the Food and Drug Administration (FDA) approved a fourth dose of the Pfizer and Moderna Covid vaccines for people age 50 and older and certain younger individuals with compromised immune systems.  FDA cited waning immunity from the vaccines and the increase in virus transmission in colder months as the reasons to recommend a booster shot in the Fall.  Drugmakers will also likely switch to a different vaccine formula that targets the most recent variants.

The economic calendar will be very light this week with the ISM Services report being the only major economic release.  The Fed calendar will be quite busy however with the Fed Governor Lael Brainard speaking on Tuesday, in addition to the speeches from New York Fed, Chicago Fed, Atlanta Fed, Philadelphia Fed, and St. Louis Fed presidents throughout the week.  FOMC minutes from the March Fed meeting that saw the first rate hike since 2018 will also be released, giving us further insights on the changes to the U.S. monetary policy.